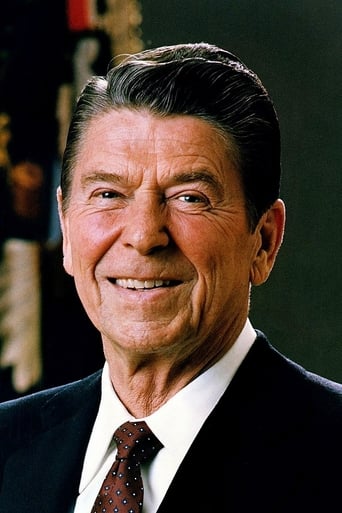 From Wikipedia, the free encyclopedia Ronald Wilson Reagan (February 6, 1911–June 5, 2004) was the 40th President of the United States (1981–1989), the 33rd Governor of California (1967–1975) and prior to that, an actor. Reagan was born in Tampico in Whiteside County, Illinois, reared in Dixon in Lee County, Illinois, and educated at Eureka College in Eureka, Illinois, with a Bachelor of Arts degree in economics and sociology. Upon his graduation, Reagan first moved to Iowa to work as a radio broadcaster and then in 1937 to Los Angeles, California. He began a career as an actor, first in films and later television, appearing in over 50 movie productions and earning enough success to become a famous, publicly recognized figure. Some of his most notable roles are in Knute Rockne, All American and Kings Row. Reagan served as president of the Screen Actors Guild, and later spokesman for General Electric (GE); his start in politics occurred during his work for GE. Originally a member of the Democratic Party, he switched to the Republican Party in 1962. After delivering a rousing speech in support of Barry Goldwater's presidential candidacy in 1964, he was persuaded to seek the California governorship, winning two years later and again in 1970. He was defeated in his run for the Republican presidential nomination in 1968 as well as 1976, but won both the nomination and election, defeating incumbent Jimmy Carter in 1980. As president, Reagan implemented sweeping new political and economic initiatives. His supply-side economic policies, dubbed "Reaganomics," advocated reducing tax rates to spur economic growth, controlling the money supply to reduce inflation, deregulation of the economy, and reducing government spending. In his first term he survived an assassination attempt, took a hard line against labor unions, and ordered military actions in Grenada. He was reelected in a landslide in 1984, proclaiming it was "Morning in America." His second term was primarily marked by foreign matters, such as the ending of the Cold War, the 1986 bombing of Libya, and the revelation of the Iran-Contra affair. Publicly describing the Soviet Union as an "evil empire," he supported anti-Communist movements worldwide and spent his first term forgoing the strategy of détente by ordering a massive military buildup in an arms race with the USSR. Reagan negotiated with Soviet General Secretary Mikhail Gorbachev, culminating in the INF Treaty and the decrease of both countries' nuclear arsenals. Reagan left office in 1989. In 1994, the former president disclosed that he had been diagnosed with Alzheimer's disease earlier in the year; he died ten years later at the age of 93. He ranks highly in public opinion polls of U.S. Presidents, and is a conservative icon. Description above from the Wikipedia article Ronald Reagan, licensed under CC-BY-SA, full list of contributors on Wikipedia.