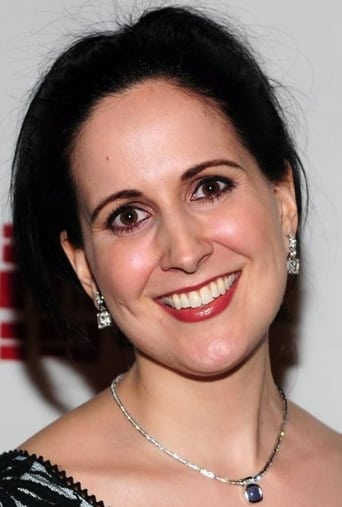 Stephanie D'Abruzzo (b. December 7, 1971) has been a Sesame Street puppeteer since 1993. In that time she has performed a myriad of background characters, and recorded vocals for a number of songs, including "Sing" (EKA: Episode 3981) and "Brothers and Sisters" (EKA: Episode 4056). Her major characters of note have included Elizabeth, a loud but cheerful little girl; Lulu, a curious monster (whom D'Abruzzo helped to develop[1]); and most recently in Season 34, Baby Bear's little sister, Curly Bear. D'Abruzzo first made contact with the Muppets through David Rudman. Rudman informed D'Abruzzo that The Jim Henson Company was having a huge casting call for female performers. She went to New York to auditioned, made all the cuts, but was only place in a talent pool that would not necessarily guarantee her future work. A few months later, she went back to participate in a month-long workshop in New York and slowly started becoming a Muppet Performer on Sesame Street. Her first day of performing was November 3, 1993 in episode 3162 where she played Monster #3.[2] D'Abruzzo has performed and voiced nearly 200 characters for various projects including Oobi (playing Uma and Inka), Bear in the Big Blue House,Donna's Day, The Wubbulous World of Dr. Seuss, Binyah Binyah!, The Puzzle Place, Rory's Place (for which she co-wrote a pair of episodes with husband Craig Shemin), Sheep in the Big City and The Book of Pooh (playing the inquisitive bird Kessie). Despite her extensive work with the Muppets, D'Abruzzo first gained greater recognition as an original cast member of the puppet musical Avenue Qwhere she originated the characters of Kate Monster and Lucy the Slut. Her performance garnered her a 2004 Tony nomination, a Theatre World Award, a special Outer Critics Circle Award (for Outstanding Ensemble and Puppet Artistry), as well as a 2003 Drama Desk nomination for the show's Off-Broadway run. In December 2005, D'Abruzzo ended her run with the project after more than two and a half years to pursue roles in I Love You Because, and worked with Bobby Lopez again on the studio album for the Walt Disney World stage show Finding Nemo: the Musical (as Sheldon and Deb). Her previous stage credits include Skitch Henderson's New Faces of 2004 at Carnegie Hall, Carnival and Chess. D'Abruzzo's television credits outside of her work as a puppeteer include an appearance on the musical episode of Scrubs and as a commentator on I Love the 70s: Volume 2. As a voice actress, she was heard in the Mo Willems animated series Sheep in the Big City (as Lady Richington, Swanky, and Lisa Rental). In 2013, she performed in the direct-to-DVD release Scooby-Doo! Adventures: The Mystery Map (as puppeteer and voice of Velma and Shirley).